Disclaimer: Lord Ganesha, the Hindu God is immensely popular in Asia and widely respected by Hindus and non-Hindus around the world. This is not a religious post.

As a child I chose Ganesha among all the Gods. I don’t remember why, but probably because he is so different and adorable.The elephant head, big ears, one teeth and a big belly, his stories of coolness, wit and fun quickly connects a child with him.

I like to keep a Ganesha Idol with me. It gives me a lot of strength. Whether I am travelling, at my office desk, home or in the car, I keep a small Ganesha statue with me.

Ganesha, the ‘Lord of the Beginning’ motivates an individual to be a leader and help in problem-solving through his mythological stories and appearance.

As a mother, an entrepreneur, and most importantly a human, Lord Ganpati inspires me in the following ways:

‘Look at the bigger picture.’ It is easier said than done.

We all get stuck in small things and issues in our day-to-day lives, no matter where or who we are. There is a temptation to lose focus, hunker down, and get involved. Whether it’s a small task, a disagreement, or a situation.

Whenever I face such issues, his big head reminds me to use my brain and be wise.

The Vision & the Decision

Once all the Gods had a competition. They had to circumambulate the world three times. The one who does this first was to be the winner.

It was to determine who should be worshipped first. In order to prove their superiority, all of the Gods started on their vehicles. Ganesha realized that his parents are his world. He went around them three times and won. He drives a mouse, by the way. In other words, he would not have won if he had thought like other Gods.

Why did he win? Simple vision of not just winning the race but adhering to values, no false ego or superiority that led to an effective decision.

We live in a highly competitive world today. With less resources and presence of mind, one can still win in this story.

“Embrace what you have and make the most of it.”

We all know that Ganesha loves Laddoos or Modak (Indian sweet). Offering Laddoos to Vinayaka makes him happy and he fulfils all your wishes.

All such traditions or sayings hold a special significance if we pay attention to them.

Big things are important in life but so are small.

We as humans should also enjoy small things and moments in life.

Ganesha is known for his friendly nature and easy-going attitude. Be it with his fellow Gods or the followers.

Once Moon laughed at Ganesha when he couldn’t walk properly and fell down after eating many laddoos in the night. Ganesha became angry on the moon and cursed that he would never be visible to anyone but when Moon apologised, he quickly forgave him and reduced the curse only to a single day.

Ganesha’s big ears signify that you should listen more.

A leader must have listening skills. Listening to someone’s woes, worries or thoughts help you understand about him. It also helps in connecting to the person emotionally and building trust.
People of all castes and religions adore Ganesha because of his friendly personality. Similarly a leader should be empathetic and approachable by all.

No Gain without Pain

It is said that Sage Vyas chose Ganesha to write Mahabharat (the longest Epic in the World). Vyas narrated and he wrote it. But there was a condition put by Sage Vyas that it had to be written non-stop.

While writing Ganesha’s pen broke and since he couldn’t stop he broke his tusk and started writing with it.

This is symbolic to the message that knowledge comes with sacrifices.

Lord Ganesha is bestowed with a very special body and appearance. Similarly we all are born with some special qualities. It is important to understand our own self and work accordingly.

This post was published on Neha Agarwal’s Linkedin on Nov 19, 2015. We have edited and republished again here on her official blog. 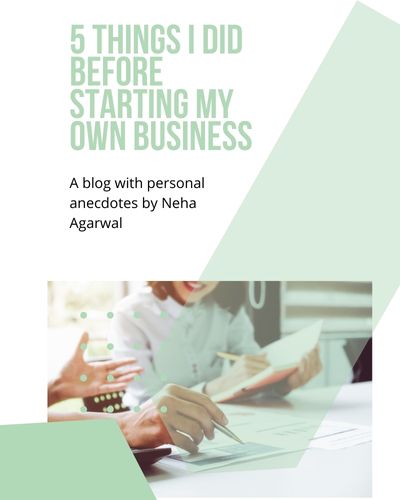